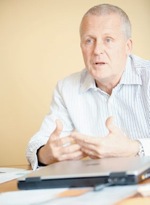 Master Certified Coach since 2002, mostly recognized for his specific competencies in systemic executive coaching, team coaching and organizational coaching, Alain Cardon is also a systemic coach trainer and coach supervisor with coach students in France, Belgium, Spain, Germany and Romania where he has opened a systemic coaching school in 2007.

As far as his personal style for executive coaching, life coaching, team coaching and organizational coaching clients, Alain has developed a direct, confronting and empowering coaching approach which may be defined as a blend of brief, systemic, creative, and breakthrough posture and techniques.  Although French national and part-time resident, his intensely international personal life and carreer also makes it difficult to define Alain's executive coaching heritage as originating from one or another coaching school of thought, one or another national frame of reference.

CONSULTANT
Starting in 1976 and within "Transformation Consultants", Alain Cardon was a communication and management consultant first with a Transactional Analysis slant then with a resolutely systemic approach. From 1985 onwards, he has specialized in Systems Analysis applications in Team Building, Team Development and Organizational Development.  Over the years, this background has gradually prepared him to become a widely recognized systemic executive coach, team coach and organizational coach.

COACH AND CONSULTANT TRAINER
Since 1980, Alain Cardon has been a coach trainer at Transformation Consultants, then at Transformation Ecole (today Mozaik International), within Transformance, a Paris-based coach school, in Metasysteme France, and at Metasysteme Coaching of which he is the founder, in Bucarest. As a visiting professor in other schools and universities, Alain Cardon also occasionally participates in numerous other personal coach and team-coach training programs.

SPEAKER
Since 1983, Alain Cardon has been  a prolific speaker for the European Transactional Analysis Association, and keynote speaker for the 2002 International Coach Federation European Conference at Sitges in Spain, for the first ICF Morocco conference in Casablanca in March 2006, for the ICF Spain Conference in Madrid, November 2006, for the World Trade Center (Bucarest), and internally for numerous corporations.
(Consult our CONFERENCE page on this website).

AUTHOR
Alain Cardon is author of numerous books (15+ )mostly first published at the Editions d'Organisation (Paris).  Some have been translated to Italian, Spanish and Romanian. He has also written articles published in daily papers (LESECHOS) and periodicals in France, the United States, Italy and Romania.  Unless specified otherwise, all the English, French and translated texts on this website are written by Alain Cardon, and are his or Metasysteme EURL copyright. (for a list of published articles and books, consult the Publications section of this website.

And, More Privately:
Alain Cardon was born in Algeria in 1949.
He grew up in Egypt, until 1967, so he can understand Egyptian Arabic.
Graduate studies in the United States until 1973, so he speaks English with a slight Middle-West American accent.
He is married and has two adult sons.
Alain Cardon is currently based in Paris, France and Bucharest, Romania.